Scroll down to view this year’s Hall of Achievement event in pictures. 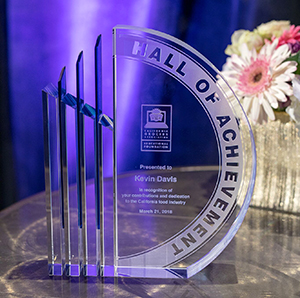 The Hall of Achievement honors grocery retailers and suppliers who have contributed substantially to the advancement of the grocery industry. Nearly 500 well-wishers from throughout the industry were on hand to honor the two inductees.

“Tonight we recognize two industry icons for their life-long commitment and dedication to this fantastic industry,” said Foundation President Ron Fong, who then outlined the criteria for induction. “I think you’ll agree that Kevin and Bob certainly meet the requirements.”

“Bob and Kevin have proven throughout their careers that education can come in many forms and valued in many ways,” Askeland said. “Providing and creating similar opportunities to improve our industry through your support of the Foundation is why we are all here tonight.”

For 26 years the CGA Educational Foundation has provided financial assistance to advance the educational goals of CGA-member employees and their dependents and offers educational programs for the grocery industry. Since that time, more than $7 million in college scholarships and tuition reimbursement grants has been awarded to grocery employees and their families. 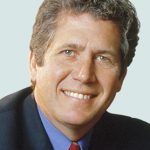 Kevin left Ralphs after 21 years to become Executive Vice President of Bristol Farms. He was promoted by the Board of Directors to President in July of 1996 and less than one year later was promoted to Chairman of the Board, President and CEO.

Supported by full scholarships from the food industry’s Western Association of Food Chains, Kevin graduated from the USC Food Industry Management Program in 1978 and later graduated as Class President of the Executive Program in the Graduate School of Business at UCLA.

In 1986, Business Week name him one of the 50 “Fast Track Kids” in American business and, in 1998, was named by the Los Angeles Business Journal as one of their 30 “Up and Comers” in Los Angeles business. Kevin was named Alumnus of the Year by the USC Food Industry Management Program in 1999 and Executive of the Year in 2011.

Married for 35 years, Kevin and his wife, Cindy, have seven children and three grandchildren. 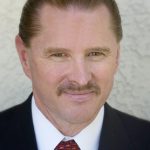 Robert “Bob” Kelly is Executive Vice President of Hidden Villa Ranch. He grew up in rural San Diego County on a small family poultry farm and graduated in 1975 from San Diego State University with a degree in Microbiology. After graduation Bob held several positions in different industries. Eventually, he became the Sales Manager with Embly Ranch in San Diego. In 1996, Hidden Villa Ranch bought Embly Ranch and the Pine Hill division was born. Bob is Executive Vice President for the Pine Hill division and is responsible for all operations, sales and marketing.

His professional organizations include board position with the Orange County Council Boy Scouts and an officer with the Illuminators, one of the largest industry trade organizations in the retail food business. Past association involvement has included board positions with Pacific Egg and Poultry Association, California Egg Commission, Embly Ranch, Sunshine Foods and Coast Packaging.

Bob and his wife, Linda, live in Upland, Calif., and have been married for over 26 years. They have one daughter. Bob has a son from a previous marriage and has two grandchildren.

The CGA Educational Foundation Hall of Achievement provides the food industry with the opportunity to recognize the achievements of those individuals who, through their foresight and dedication, have enhanced California’s food distribution industry. Proceeds from the event help fund the Foundation’s college scholarship and tuition reimbursement programs.

The CGA Educational Foundation was created under the direction of the California Grocers Association Board of Directors in 1992. Its mission is to provide financial assistance to advance the educational goals of CGA member company employees and their dependents and offer educational programs to advance the grocery industry. For more information, visit www.CGAEF.org.