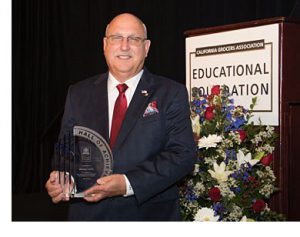 Frahm, Executive Vice President, Administration & Distribution for Stater Bros. Markets, joins a prestigious group of Hall of Achievement recipients to be recognized for their many contributions to the grocery industry and the communities they serve.

As a special part of the program, the Foundation paid tribute to previous Hall of Achievement honorees – the “Legends of the Industry” – who left a lasting impact on the grocery industry.

“We are very excited to welcome George Frahm into our prestigious Hall of Achievement during the Foundation’s 25th anniversary,” said CGAEF President Ronald Fong. “George has served the grocery industry his entire professional career and like his Hall of Achievement peers has generously given back to the communities and industry he’s served.”

“It is no coincidence that we are recognizing someone with such deep roots in our industry in the same year we celebrate the Foundation’s 25th anniversary,” said Brad Askeland, North State Grocery Co., and chair of the CGAEF Board of Trustees. “The Foundation is honored to add his name to its prestigious list of industry icons.”

The CGA Educational Foundation was created 25 years ago under the direction of the California Grocers Association Board of Directors. Since its inception, the Foundation has awarded more than $6 million in scholarships and tuition reimbursement to CGA-member company employees and their dependents. For more information regarding CGAEF programs and for a complete listing of past Hall of Achievement honorees, visit www.cgaef.org.

George began his supermarket industry career in 1973 at the Stater Bros. Markets in Glendora, Calif., as a Clerks Helper and Janitor and continued to work at Stater Bros. while furthering his education.  In 1973, he received an Associate of Arts Degree from Citrus Community College, and in 1975 he received a Bachelor of Arts Degree in Psychology from California State University, Los Angeles.  George is also a graduate of the University of Southern California Food Industry Executive Program.

George is a past Chairman of the California Grocers Association Board of Directors, and has served as a CGA Educational Foundation trustee.

In true Stater Bros. fashion, George believes in doing the right thing for the right reason.  He is an avid supporter of the Leukemia & Lymphoma Society and regularly volunteers for the KFroggers For Kids Radiothon benefitting Loma Linda University Children’s Hospital and the Stater Bros. Charities Annual Believe Walk in the fight against all cancers in the communities served by Stater Bros. Markets.

In his time away from work and volunteer efforts, George enjoys gardening, playing golf and traveling.  George has been married to his wife Debbi of 41 years and together they have one son and one grandson.